More often than not we think that Mothering Sunday (UK) and Mothers Day (USA) are the same celebration on different dates. However although they cross referenced each other the raison d’être could not be more different.

Mother’s Day was originally started after the Civil War, as a protest to the carnage of that war, by women who had lost their
sons. Anne was a suffragette who wrote a passionate appeal to women and urged them to rise against war

Arise, then, women of this day! Arise all women who have hearts,

whether our baptism be that of water or of fears

Say firmly: “We will not have great questions decided by
irrelevant agencies. Our husbands shall not come to us, reeking
with carnage, for caresses and applause. Our sons shall not be
taken from us to unlearn all that we have been able to teach
them of charity, mercy and patience.

We women of one country will be too tender of those of another
country to allow our sons to be trained to injure theirs. From
the bosom of the devastated earth a voice goes up with our own.
It says “Disarm, Disarm! The sword of murder is not the balance
of justice.”

Blood does not wipe our dishonor nor violence indicate possession.
As men have often forsaken the plow and the anvil at the summons
of war, let women now leave all that may be left of home for a
great and earnest day of counsel. Let them meet first, as women,
to bewail and commemorate the dead.

Let them then solemnly take counsel with each other as to the
means whereby the great human family can live in peace, each
bearing after their own time the sacred impress, not of Caesar,
but of God.

In the name of womanhood and of humanity, I earnestly ask that a
general congress of women without limit of nationality may be
appointed and held at some place deemed most convenient and at
the earliest period consistent with its objects, to promote the
alliance of the different nationalities, the amicable settlement
of international questions, the great and general interests of
peace.

In America, Mother’s Day is the second Sunday in May, as proclaimed by President Woodrow Wilson in 1914. It is marked on that day because it was the result of a campaign by Anna Jarvis (1864-1948), whose own mother had died on May 9. 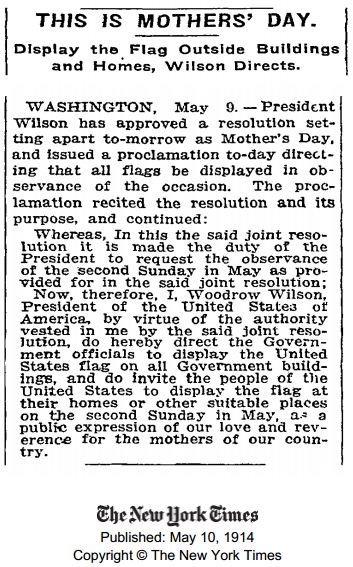 Constance Smith (UK) (1878-1938),  was inspired in 1913 by reading a newspaper report of Anna Jarvis’s campaign in America.“By 1938,” wrote Cordelia Moyse, the modern historian of the Mothers’ Union, “it was claimed that Mothering Sunday was celebrated in every parish in Britain and in every country of the Empire.” In the UK the celebration was very much picked up as a religious ceremony held on the fourth Sunday of lent.  Also, by and large a working class celebration. As servants and hands’ on estates were given the day off to visit and present gifts, usually flowers by way of saying thank you for their unconditional love and parenting.

Although the sentiments are largely overlooked for commercial ‘Hallmark’ these days the origins of Mothering Sunday and Mothers day seem even more important today than ever. Politics, culture and celebration and a time to reflect on peace.